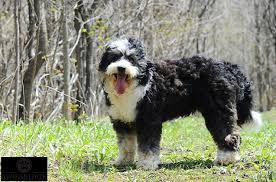 My dog has an obsession with our kitten.  He just wants to play and he wants the kitten to play too.  Sully, my Bernese Mountain Dog mix, was very interested in Jack, the orphan kitten, when he came to live at our house.  You see, Jack’s mother had been killed in the road and Jack was still sitting right by her side when my daughter stopped and picked him up.  Jack came home as a 5 week old baby who needed special help.  Sully, who is usually a rambunctious, ball of energy, laid right down and calmly licked Jack from head to toe and then wouldn’t let Jack out of his sight.  For weeks, Sully didn’t want to play, he just wanted to make sure Jack was safe from the perils of under-the-couch or too-near-the-stairs.  Sully alerted us to Jack’s whereabouts repeatedly.  When Jack would be put in the bathroom for eating or sleeping, you could almost see Sully breathe a sigh of relief as he laid down and his shift was over for a spell.  As Jack has grown, Sully has gotten more comfortable with Jack scampering through the room or sliding across the kitchen floor.  Sully will even chase him now and plant a large paw on 6-month-old Jack to get him to stay still for brief period of time.  Sully takes his job as the kitten-herder very seriously.

A traveling pastor came to our church years ago and his sermon was about his role as a sheepdog.  He explained that it was his job to keep the flocks together and headed in the right direction and that the Shepherd counted on him to take his job very seriously.  It was this sermon that came to mind as I watched Jack and Sully in their growing relationship.  Sully certainly wasn’t counted on to keep Jack safe, but he took his self-imposed role to heart and worked at keeping his little tiny flock, (Can 1 animal be considered a flock?) headed in the right direction.  Just as Jack came into Sully’s care from heartache and loss, we are in our Shepherd’s care with heartache, loss, worry, fear, frustration, and longing.  He cares so much for us in our needs that He sends sheepdogs to chase after each and every one of us.  Matthew 18:12 “If a man has a hundred sheep and one of them wanders away, what will he do?  Won’t he leave the ninety-nine others on the hills and go out to search for the one that is lost?”

I am so grateful for all of the sheepdogs that have played a part in my life.  There have been pastors and aunts and parents and friends as well as grandparents and cousins who herded me back to God’s path when I had strayed away.  We need to heed our sheepdogs in whatever form they take and know that our Shepherd is looking for us and loving us.

Paul felt this duty too as we read in 2 Corinthians 11:28-29 “Besides everything else, I face daily the pressure of my concern for all the churches.  Who is weak, and I do not feel weak?  Who is led into sin, and I do not inwardly burn?”

Take care of your sheepdogs.  Pray that they are fed and watered with spiritual food and drink that they may lead us to the path that Jesus has set for us.

One thought on “Take Care of Your Sheepdogs”